It’s been quite some time since I blogged. However, I had a string of article ideas lately—specifically related to worship ministry—and felt compelled to share some insight on things I’ve learned. This will be the first of several posts to be released over the coming weeks/months.

Several months ago, I found myself at a dead end. I had spent hours for days scouring Google & YouTube for articles and videos that could help me, all to no avail. My aim: to find direction on building a pedalboard for rhythm guitar in worship.

The idea had seemed simple at first. And I was sure the internet had something to offer. But I was sadly mistaken. Unsurprisingly, there were endless lists of blogs and reviews of gear specific to lead guitar tone-shaping in worship contexts. But the search engines and databases were bankrupt when it came to worship soundscapes & rhythm guitar.

Since the internet offered no definitive help, I began my own quest: to achieve the best rhythm tone for worship guitar that I could. Now as a disclaimer, I’ve never been a “tone snob,” but I certainly appreciate good guitar tone when I hear it. That being said, I also understand that guitar tone is entirely subjective. So keep in mind that what follows is the result of my personal research, built on the foundation of gear I already had and coupled with my preferred taste in worship guitar tone.

I’m not a millionaire (obviously). And even though I love collecting guitars and gear, I have to save up money (and—if we’re being honest—occasionally use some credit) to buy stuff just like you. So I wasn’t about to go buy a whole entirely new rig. I had some gear basics that I’ve been happy with for some time that created a solid foundation on which to build. Let’s start with guitar. I play a Fender MIM Blacktop Telecaster with a humbucker/humbucker setup. It has a three-way tone selector and a singular tone knob. It’s a sweet guitar that didn’t break the bank, and it feels and sounds good. I was also already equipped with a Vox Night Train head running through a 1x12 NT Cab (Celestion loaded). I love this amp because of the versatility it offers. For worship applications, I can turn the volume to almost nothing, but not sacrifice tone. To round it out, the only other gear I had to start was a Pedaltrain Classic 2, a TC Electronics Polytune tuner, a BBE Sonic Maximizer, and a MXR Pedal Power underneath.

I listed some of my old, unused gear on Reverb to make a few hundred bucks and help fund my quest. (Side Note: I’m a HUGE fan of Reverb as both a seller and a buyer) I didn’t set out with any agenda or bias for my purchases...mass produced or boutique built didn’t matter...as long as the tone was sufficient to my desires.

Since the gear I started with provided a satisfactory clean tone, my quest began with finding the necessary basic pedals that every pedalboard needs. The first 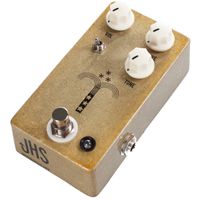 logical step was dirtying up my tone. I wanted to find an overdrive that would break up my signal well, but that was also light enough where it wouldn’t be overwhelming to a congregation when engaged. After much research and many conversations, I settled on the JHS Morning Glory (v3). Next, I knew I needed something with subtle modulation...something like a chorus pedal. I went with a classic, the BOSS CH-1 Chorus. The only thing missing after that was a reverb pedal. I watched videos for days before landing on the MXR M300 Reverb. In the end, I loved it because of its adaptability on the fly, and for the pad effect that’s built-in.

After purchasing the aforementioned basic pedals, I took about three months to pick and choose the next several before acquiring them. My goal was to give myself some unique sounds & effects stacking options, but keep it all confined to my PT Classic board & maintain the ability to be powered by my MXR Pedal Power. I would say that I took a “less is more” approach, which I think is fitting for a worship rhythm guitar rig. I don’t have the need to play lead lines, or even to stand out much at all, I just wanted to play underneath the lead guy(s) and not get completely lost in the mix.

I started with trying to find a delay pedal that I could “set and forget,” only stomping it when necessary. During my research, I fell in love with the Keeley Caverns pedal, a side-by-side delay + reverb with almost endless possibilities & added it to my board. 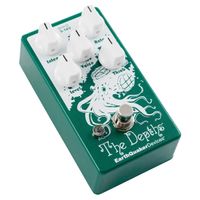 But I didn’t stop there. Being in New Orleans and working in sound production here, I’ve come to appreciate the legendary Leslie rotary speaker sound. I dug through tons of videos to find that ideal warble, and landed on The Earthquaker Devices “The Depths.” In the end, I desired warmth, knobs and adjustments...and that’s exactly what the pedal included. I don’t use it often, but it adds some amazing dimension when I’m looking for an ethereal layer of sound.

The next purchase in my quest was driven by the concept of stacking overdrives. I read up quite a bit about this idea before even looking for a “second stage” overdrive. I wanted something that could work as a stand-alone overdrive that was dirtier and more aggressive than my Morning Glory, but that would pair with it well. There are lots of worship guitarists implementing this idea of stacking drives, but everyone has a different opinion on what sounds best. I settled on the Bondi Effects “Sick As” and I LOVE it. It’s unequivocally the best overdrive pedal I’ve ever owned or played.

My final buy was based on the need for a delay with tap tempo. When searching, I kept landing on the Strymon El Capistan...so I splurged and bought one. It’s packed with limitless options, so much so that I’ve honestly only scratched the surface of its functionality.

For those interested, here’s my signal chain, or the order of effects on my board. 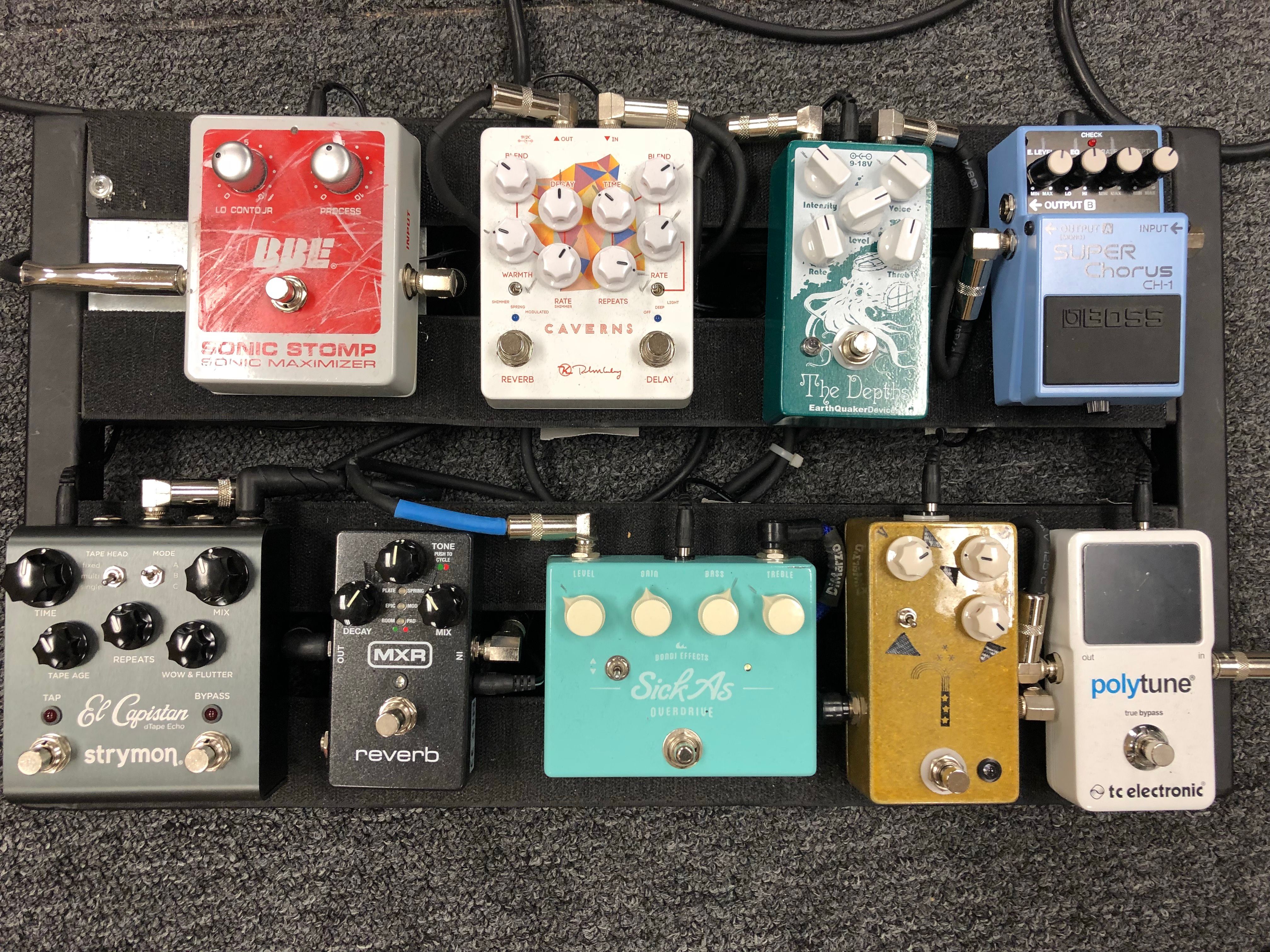 As I stated above, I wanted to get the most out of the least, and my final setup has allowed me to achieve that. I have multiple stages of overdrive, multiple reverbs & delays, and a few other pedals that add some “wetness” to my tone. There will likely be edits to my setup in the future, but I think I’ve achieved the goal of creating an efficient & effective (pun intended) rhythm guitar pedalboard, with worship music in mind.

And this is where I want to swing the focus back to you (the reader).  What sounds good to your ears will likely be much different than what sounds good to mine.  That's okay. Remember: tone is a subjective kind of thing.  But I do want to leave you with a few steps that may help you in your own quest.

1. There's nothing wrong with used gear (unless there's something wrong with it) - Almost every single one of my pedals was bought used.  Why?  Because sites like Reverb and Amazon are loaded with listings of effects that are in great shape but will save you (sometimes hundreds of) bucks.  Purchases like this are risk-free, because the purchasing agreements (most of the time) allow you to return a product you are unhappy with.

2. Start with the basics - If you're a rhythm guitar player in a worship setting, the basics of what you need on your board are largely predetermined.  You can re-invent the wheel if you want--especially if you're trying to create something new and fresh--but I'd recommend sticking to these three effects families: overdrive, modulation, reverb.  Go as big or as small as you want, just start here.

3. Make it your own - There are more effects options out there today than ever before.  That's a good thing.  Even so, it's easy to be a copycat and only play the gear you see the touring guys playing.  But since the options are infinite, I would suggest immersing yourself in YouTube reviews and looking at dozens of options of each effect before making your purchase.  Think of your board as a third of your tone fingerprint, and make it unique to you.

I hope this article will at least save you from heartache and headache as you begin or continue your own quest. Most of all, I pray God continues to use your giftedness in the greatest way, for His glory and your good.